Home / Downloads / e-books / Behind the Scenes with the Mediums 1912 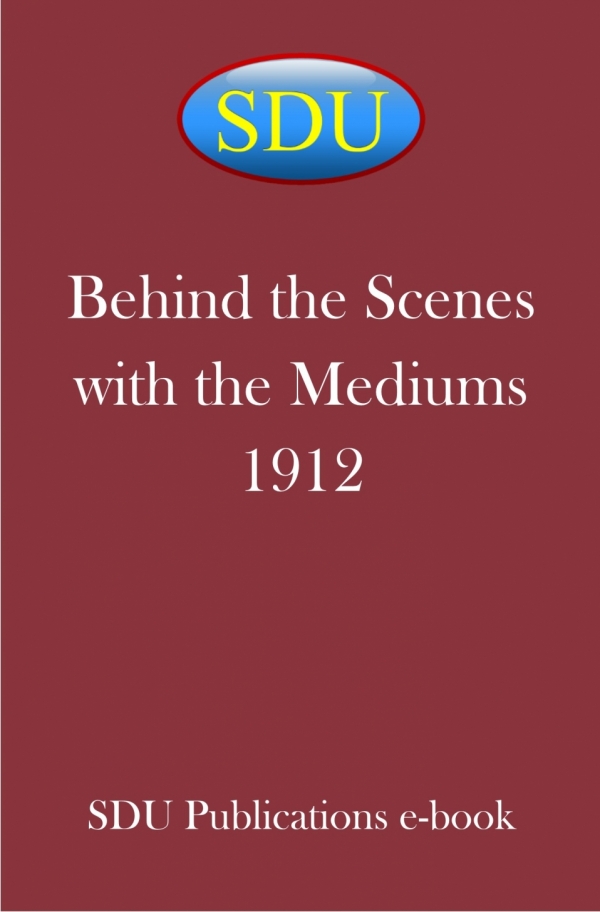 HALF HOURS WITH MEDIUMS
1. Introduction.
2. Washington Irving Bishop's Sealed Letter Reading in a New Dress.
3. Test Where a Trick Envelope with a Double Front is used.
4. Test Where the Medium Secretly Filches a Letter from the Pocket of the Sitter.
5. The Mystic Oracle of the Swinging Pendulums, or Mind over Matter.— A Rapping Hand.—Light and Heavy Chest.
6. Tests Given in a Large Store Room with Curtains for Partitions, Using Telegraphy, etc.
7. A Billet Test Using a Trick Envelope.— A Spirit Message Written on a Slate, in the Sitter's Presence.
8. Flower Materialization.
9. The Dark Séance.— A Deceptive Grip,—Mental Tests—Spirit Voices, Taps, and Lights.
10. Materialisation. — Preparation of Luminous Costumes, Method of Presentation, etc.
11. Tests Given in a Room in a Hotel—Slate-Writing on Slates Selected, Cleaned, and Held by Sitter.—Test Wherein the Sitter's Own Slates are Used.—Billet Work in Connection Therewith.—The Prepared Table.
12. Reading Sealed Billets Before a Company in a Room in which Absolute Darkness Reigns.

MEDIUMISTIC READING OF SEALED WRITINGS
1. Introduction.
2. Preparation of the Writings.
3. Reading the Writings.—Production of a Spirit Message.
4. The Secrets Explained.—Slate Trick Requiring a Special Chair.

SPIRIT SLATE-WRITING AND BILLET TESTS
1. Introduction.
2. Message Produced on One of a Stack of Slates, First Method.—Method Using a Rug or Newspaper.
3. Message on One of a Stack of Slates, Second Method.— How to Pass the Slates from One Hand to the Other.
4. Message Produced When but Two Examined Slates are Used.—Some Expert Manoeuvring, and the Importance of the "Pass."
5. Message Produced on One of Two Slates Selected from a Stack, Third Method, where the "Pass" and Some Expert Manoeuvring are Introduced.—Production of a Message Written with a Gold Ring Belonging to the Sitter.
6. To Secretly Read a Question Written on a Slate by a Sitter, when a Stack of Slates is Used. How to Secretly Obtain a Confession or Question, Written on Paper and Sealed by the Sitter, when a Stack of Slates is Used.
7. Message Produced on a Slate Cleaned and Held under a Table by a Sitter.
8. Slate Trick Requiring Three Slates and a Flap.—The Same Used as a Conjuring Trick.—Preparation of the Slates.
9. Slate Trick Requiring a Double-Hinged Slate and a Flap.
10. Independent Paper Writing.—Two Slates and a Silicate Flap Used.
11. Slate Trick with a Single Slate and a Flap, which is Suitable for Platform Production.—Methods of Forcing the Selection of a Certain Word.—Methods of Forcing the Selection of a Sum of Figures. —The Same Trick Where Two Slates are Used.—The Same When Three Slates are Used, and a Spoken Question Answered, with Words in Coloured Writing.
12. Methods of Obtaining a Secret Impression of the Writing of a Sitter.—A Store-Room Reading where this is Used.—A Test Using a Prepared Book.— How to "Switch" a Question.—Tricks Depending on this Principle. — Tests Given by Various Chicago Mediums.—Reading a Message by Pressing it on a Skull Cap Worn by Medium.
13. Tricks where the Sitter Brings his Own Slates.—Various Traps.—Psychometric Tests.—Message on Slates Wrapped in the Original Paper in which they were Purchased.—Other Messages.
14. Message on a Sitter's Slate Produced by a Rubber Stamp.—Message Produced by an Adroit Exchange of Slates.—Chemical Tricks.—Other Methods.—Means of Securing Information.

SOME MODERN SORCERY
1. Presentation of the Tests.
2. Explanation of the Secrets.
3. The Same as Adapted to Work in a Double Parlour.
4. The Use of the Card Servante and Blackboard.

SOME UNUSUAL MEDIUMISTIC PHENOMENA
Some Strange and Unusual Tests with an Explanation.

RELATION OF MEDIUMSHIP TO PALMISTRY, ASTROLOGY, AND FORTUNE-TELLING
Tests in Connection with a Reproduction of the Sitter's Palm.

PERFORMANCES OF THE ANNIE EVA FAY TYPE.
Questions Written and Retained by the Spectators answered by a Blindfolded Lady on the Stage.

AN IMPROVED BILLET TEST
Reading Billets for an Assembled Company.