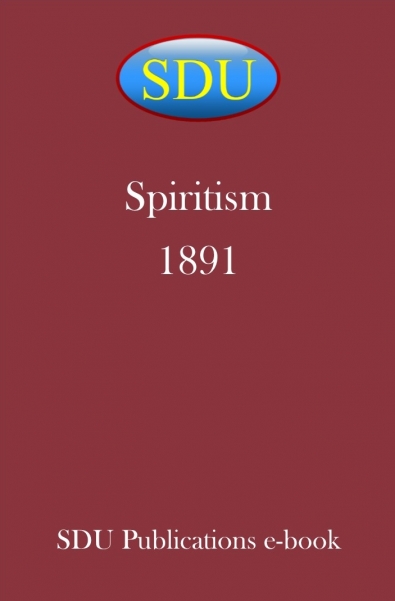 CHAPTER I - MY FIRST THOUGHTS ON TABLE-TURNING AND SPIRITISM

In my youth a novel amusement was introduced into Sweden called table-turning. In answer to my inquiries as to what this might be I was told that it was something new and remarkable which had been first discovered in America, where it had created a great, sensation, had then been brought to England, France, and Germany, and finally gained a footing in Sweden.

I next asked why it was called "table-turning." I was then told that when several people were seated round a table forming a chain by holding each other's hands, and allowing them to rest on it, the table after a longer or shorter interval began to move of itself.

"Is it to be wondered at," I asked, "that a table should move when so many hands are pushing it?"

But then I was told that before the chain was formed, each person promised that he would not push the table in the least, or in any way attempt to move it from its place.

"If all faithfully kept their promise," I replied, " the table would certainly remain where it was."

That this was not the case, I was assured. On the contrary, when a circle had been formed round the table of perfectly reliable persons, their hands resting on it so lightly as hardly to touch it, the table, in spite of every one conscientiously keeping their promise, would begin to move of itself, to creak, turn, sway gently backwards and forwards along the floor, and finally very often dance about at a rapid pace.

My answer to this assertion was that I must have proofs in order to be convinced and that it would interest me greatly to be present at an experiment like the one described.

Accordingly a suitable table was chosen, around which we formed a circle, I feeling perfectly sure beforehand, that nothing extraordinary would happen. I was right that time and on several successive occasions when I, together with others, attempted to make tables, keys, or hats, " dance."

It seemed to me simply impossible, that inanimate objects would be endowed with a life and volition of their own.

Once I asked what was supposed to cause independent motion in inanimate objects.

Great was my amazement when I was told that the table was not believed to move of itself, but was supposed to be under the control of spirits. This appeared to me incredible, for surely we should be able to see them. Besides, how could they possibly pass through locked doors and closed windows? No, this was altogether too preposterous! . ..