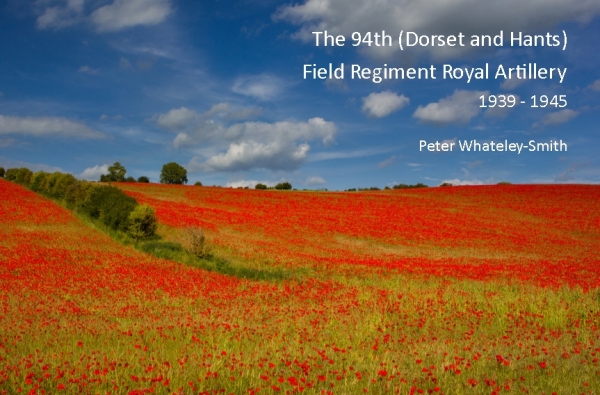 First published 1948, This edition 2017, 159 pages, 30 photographs and illustrations, plus 3 maps, paperback. This is an updated version and includes photographs that were not in the original 1948 edition.

On the 17th June, 1944, the advance parties of the 43rd Division set foot on the coast of Normandy, to be followed, after an interval of high seas and much anxiety, by the main bodies. The Divisional Artillery proceeded almost at once "to do what it had practiced so many times at home." These words, stolen from a slightly different context in the early pages of this story, will make good reading for those who had possessed their souls in patience, in the sure knowledge that every extra day vouchsafed for training made success more certain on the day.

Between its first action on the 26th June 1944 and the sounding of the cease fire on the 6th May 1945, the 94th Field Regiment fought in nearly all the major battles of the campaign in North West Europe. The bloody dog-fight in the Odon Valley, with the epic of Point 112, the slogging advance through the bocage from Caumont to Mount Pinçon and beyond, the rapid thrust to the Seine, and the brilliant assault crossing which followed it, occupied a period of some sixty-three days, during which the Regiment was almost continuously in action. There followed a short "rest'' on the plateau east of the river, and then months of gruelling fighting in widely varying sectors of the front, from Nijmegen to Geilenkirchen, in the battle of the Rhineland, the crossing of the Rhine, and the final advance which ended in overwhelming victory.

The infantry of 43rd Division, and particularly of the 129th Infantry Brigade, will not easily forget the quality of the support which they received from the 94th Field Regiment, in attack and defence, throughout this great campaign.

Battle is the ultimate test, both of individuals and of units. Men know this, and the knowledge spurs them on to great achievements. It is not so easy to maintain enthusiasm and efficiency during a long drawn-out period of training and waiting, while the months pass into years and the objective seems as remote as ever.

I was privileged to have the 94th Field Regiment under my command, as one of a superb team, not only in the battle, but during the far more exacting period of preparation for it; and, while the exploits of the Regiment from the Odon to the Elbe make glorious history, I shall personally remember it at least as much for the magnificent example it set during the difficult times at home. The spirit which animated all ranks was most clearly reflected in the personality of Tom Bishell, who commanded the Regiment throughout my time as C.R.A., and whose death in action was such a grievous blow to us all. To me, he was the embodiment of his Regiment's most outstanding virtues—unswerving loyalty, and steadfast devotion to duty.

On 14th November, 1944, I succeeded to the Command of 129 Infantry Brigade on the death of Brigadier Mole, D.S.O. He had commanded the Brigade during the heavy fighting in Normandy, on the Seine and on the island about Elst. Immediately after taking over command I was taken round the O.P.s and Gun Positions of the 94th Field Regiment, Royal Artillery, by Lieut.-Colonel M. Concannon, D.S.O. I can well remember how impressed I was by the efficiency and high morale of all its members.

It gave one great heart to realise that this was the Regiment which would normally support us during subsequent operations. All members of 129 Infantry Brigade and the Armoured Regiments with whom we worked in co-operation were loud in their praise. The 43rd Division and in particular my Brigade, were most fortunate in having such high-class gunners to support them.

On walking over old battle fields, I was literally amazed at the accuracy of their fire.

I take this opportunity of thanking Colonel Concannon and all ranks of the 94th Field Regiment for their most loyal and efficient co-operation during the battles we fought together.

I do indeed feel that I have been greatly honoured by being asked to write a short foreword to the history of the 94th Fd. Regt., for it was never my good fortune to go overseas with the Regt.

I have always liked to think that there was something in the training of the Regt. in the early days of the war that helped towards building up the magnificent unit that fought overseas and I am now trying to say in a few words what I think that something was. First of all during the first year of the war we lived as a Regt. It would often have been far easier and more comfortable for both officers and men to split into small messes, but then we should never have quite become that one happy family or built up that regimental spirit that came from sharing all our minor worries and discomforts.

Secondly, I was amazingly fortunate in my Regimental H.Q.s. Benson and Holmes had been with me in "J," and Taylor came from "K." This meant that we had all been trained and thought on the same lines and, as both Benson and Holmes were magnificent instructors, I was able to tell A.G.6 that I did not mind how inexperienced the officers they sent me were provided that the material was good.

May I finish by saying thank you to all ranks who helped so loyally in those early days to build up the 94th Fd. Regt.