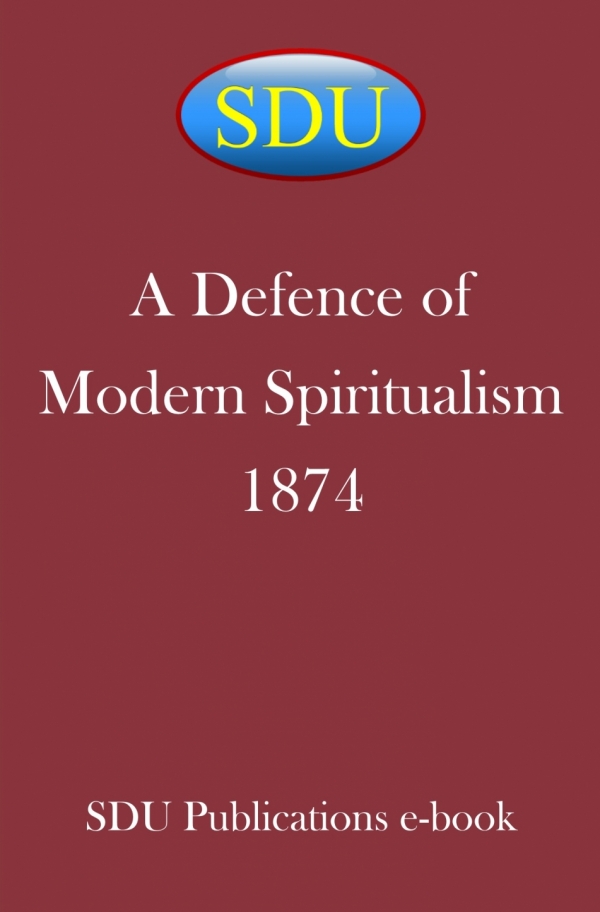 The signs are, that both the moral and the religious systems of the future will be greatly modified by the advance of science. They will be more and more conformed to the facts of nature; not only to the facts which a diligent Materialism, working in a single direction, has brought to light, but to the transcendent facts which Modern Spiritualism has restored and proved. The one order of facts is incomplete without the other; and Materialism is as surely doomed to be encircled and transfigured by the wider horizon of Spiritualism, as the Ptolemaic system of the universe was doomed to be superseded by the Copernican.

Unpopular facts often encounter an opposition quite as persistent as that which follows unpopular theories; and so intelligent Spiritualists are not disturbed by the antagonism which their facts have met with from the Huxleys, Tyndalls, Carpenters, and Büchners of our day. All these men, working as they are for science in their different ways, though under the disadvantage of an ignorance of certain phenomena of vast significance, are welcomed as fellow labourers in the cause of truth by Spiritualists; for the latter, relying on their facts, are confident that genuine Science includes them all, and that every new discovery must be in harmony with all that they hold as true. Opposition to the phenomena, proceeding as it does from lack of knowledge, simply indicates the magnitude and astonishing character of the facts themselves, which could excite such incredulity in the face of such overwhelming testimony.

Among the men of science who have either admitted the facts, or both the facts and the theory, of Spiritualism, are Hare, chemist; Varley, F.R.S., electrician; Flammarion, astronomer; Crookes, F.R.S., chemist; Hoefle, author of the ''History of Chemistry;" Nichols, chemist; Fichte, philosopher; Liais, astronomer; Hermann Goldschmidt, astronomer, and the discoverer of fourteen planets; Von Esenbach, the greatest modern German botanist; Huggins, F.R.S,, astronomer and spectroscopist; De Morgan, mathematician; Dille, physicist; Elliotson, Ashburner, and Gray, physicians and surgeons. To no one eminent man of science, however, has Spiritualism been more indebted than to Alfred Russell Wallace, F.R.S., distinguished for his researches in natural history, palaeontology, and anthropology. His "Defence of Spiritualism," here presented, appeared originally in the London Fortnightly Review for May and June, 1874. Containing as it does the latest facts, no better tract for Spiritualists to offer as an answer to their opponents has yet appeared.

Mr. Wallace, though he arrived, simultaneously with Mr. Darwin, at similar conclusions in regard to the origin of species, differs from him on a most important point; for Mr. Wallace believes that "a superior intelligence is necessary to account for man." His acquaintance with the phenomena of Spiritualism must always give him, in the sweep and comprehensiveness of his anthropology, a great advantage over Mr. Darwin. Besides his great work on the "Natural History of the Malay Archipelago," and an account of his "Explorations on the Amazon," Mr. Wallace is the author of "The Theory of Natural Selection," and of many valuable papers in scientific journals. Dr. Hooker, president of the British Scientific Association, wrote, in 1868, "Of Mr. Wallace, and his many contributions to philosophical biology, it is not easy to speak without enthusiasm; for, putting aside their great merits, he, throughout his many writings, with a modesty as rare as I believe it to be in him unconscious, forgets his own unquestionable claims to the honour of having originated, independently of Mr. Darwin, the theories which he so ably defends." The testimony of such an investigator as Mr. Wallace in behalf of the stupendous phenomena of Spiritualism is not to be lightly put aside or ignored. What can be said in reply to such an array of facts as he presents?