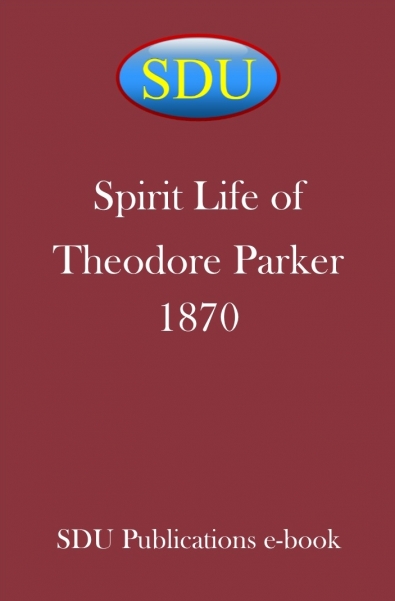 The circumstances and conditions under which this book was written render their brief narration important, in justice both to the medium and the inspiring intelligence.

It is due to the medium, a lady of unimpeachable integrity and candor, because, whatever judgment unbiased criticism may render upon the statements and sentiments herein contained, or their form of expression, as corroborative, or otherwise, of their purported authorship, it is quite certain that Miss Ramsdell can not, under the circumstances, be deemed to have originated them.

It is due to the invisible author, because the limitations imposed upon the utterance of his thoughts by the peculiarities of the medium's organization, and her limited literary culture, must necessarily have modified his effort.

Miss Sarah A. Ramsdell, the amanuensis of this volume, was, at the time of her development as a medium, engaged with her sister in the business of dressmaking at Lake City, Minn. Attending by invitation two or three spiritual circles, she found herself, at one of these gatherings, thrown into a semi-trance condition, and powerfully impelled to write the thoughts that crowded upon her mind. This she did; and the result was, at several sittings, the production of short essays upon various subjects, purporting to be dictated by Theodore Parker in spirit-life.

Miss Ramsdell had no acquaintance whatever with the history, character, or writings of Mr. Parker. She had heard of him, in a general way, but had never had occasion to know or think of him particularly. Some of these essays were published in a spiritual journal, and others read before public assemblies in different places; being received with decided pleasure and appreciation. In the spring of 1869, the author announced his intention of writing a history of his spirit-life; but it was not commenced until the autumn of the same year.

When writing, the medium experiences great exaltation of feeling; a glow of intense pleasurable activity of the mental faculties, through which, thoughts and language seem to flow as from an inexhaustible fountain, without obstruction, save from the difficulty of writing fast enough to keep the stream of inspiration within the channel of language. Although intensely conscious of her occupation, she is so absorbed in it as to be practically unconscious of what is transpiring around her. The writing continues at each sitting so long as the mental control is retained by the spirit-author, and is resumed whenever a premonition of his desire to communicate is received.

Having enjoyed no other advantages of education than those afforded by a common school in the country twenty-five years ago, Miss Ramsdell has never been ambitious of literary distinction; nor had the thought of authorship ever crossed her mind. Finding herself thus unexpectedly selected for what she believes to be an important and beneficent work, she desires, in humility, to prove faithful to her spirit-guide; and therefore publishes this work at his desire. Having verified many of the facts communicated to her by the spirit, and feeling positive of his identity through the evidence interiorly imparted to her, she proposes still further to co-operate with him in these efforts to enlighten the world upon the great subject of man's spiritual nature and relations.

This work is one of a large and constantly-accumulating class of volumes purporting to be written or constructed in the spiritual world by authors who were once mortal inhabitants of the earth. Their intrinsic character alone will be the test by which the critical mind will judge of the probable truthfulness of these claims. It is not, however, at all incompatible with honesty and good faith on the part of the mediums, if the books thus written should not, in all cases, justify their claim of authorship.

The psychological border-land between the spheres of spiritual and mundane existence has not been yet so thoroughly explored as to enable any one in the body to dogmatize upon the conditions under which mortals and immortals may best meet and hold communion together. They who have passed from earth seem in our day and generation to be experimenting in this direction; and the crude results of their experiments, in the various forms of manifestation now so common, are properly the subject of patient study by those to whom they are submitted.