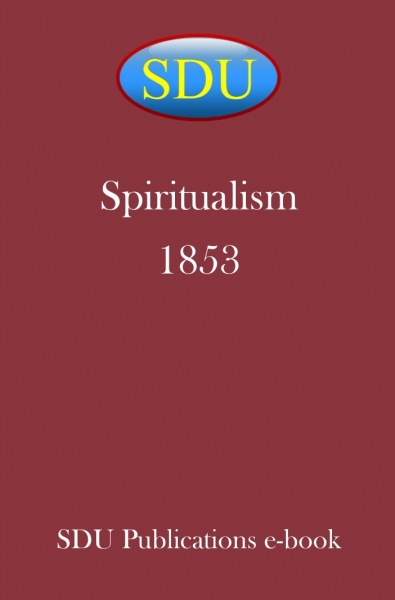 The undersigned first became personally acquainted in April, 1852. They had both been engaged in the investigation of spiritual intercourse, and they occasionally met at circles during the ensuing summer. But in the spring of 1853, after the Judge's return from an absence from the country of nearly four months, they met again, and agreed to conduct their investigations together, and with renewed energy.

Accordingly a circle was formed to meet at Dr. Dexter's house, consisting of Dr. and Mrs. Dexter, Mr. Owen G. "Warren, author of "Supernal Theology," and Judge Edmonds. All of them were more or less developed as mediums, though the communications were mostly through the Doctor, as the best developed. After a while, Mr. and Mrs. S. were added to the circle, she being developed as a most excellent speaking medium.

The circle met twice a week at the Doctor's house, and communications were received, which are given in this book. But it was soon apparent that others were to be received, and every evening that the Doctor visited the Judge at his residence, they were received. Most of those also are given in the book, those only being omitted which were not of general interest. They purported to come principally from Sweedenborg and Lord Bacon, though occasionally some others would write through the Doctor's hand, and more frequently speak through Mrs. S.

It was not originally the purpose of the undersigned to publish a book, nor were they aware that a regular plan of teaching through two prominent spirits was to be pursued. But as it had been Judge Edmonds' habit to keep minutes of his investigations, and write them out in full, he did so in this instance; but he supposed he was writing them for his own use, and to be incorporated in his other records, and he therefore continued the plan he had pursued of writing them out as for himself, and speaking of himself, like Franklin, in the first person singular, rather than like Caesar, in the third.

When in time the purposes of the teaching spirits became manifest, and the publication of the revelations was in view, it was not thought worth while to alter the form in which the minutes were kept, for they were anxious to give the revelations to the world as precisely as possible as they received them, and they believed that a few words of explanation would make them intelligible in this respect. When the revelations were given through the Doctor, he, in the first instance, wrote them down in pencil; when they were given through Mrs. S., they were written down in short-hand by the Judge; and when given through the Judge, they were written down by the Doctor or Mr. Warren. But in all instances they were reduced to form, and written out in full afterward by the Judge, as they now appear. So that in all cases it is him that is speaking in the first person singular, except when the spirits are speaking.

The desultory character of the teachings in this volume will, it is hoped, be obviated in the next. Already has the work for that volume begun, and the circle meet four evenings in the week for that purpose. Two of the evenings are devoted to teachings in regard to the great doctrine of Progression, from the most inert particle of inanimate matter to the spirit of man, and two to an illustration and exemplification of life in the spheres. In respect to the latter, it has been said by the teaching spirits, "this first teaching or vision of fact is the continuation of our second volume, and in it will be given more of life, actual life of spirits than ever before; their occupations, habits, connections, dress, conversation, pleasures, amusements, business, and, in fine, all that could or should interest you as belonging to the spheres. Farther than this we can not go, except to show the passage from one sphere to another. You see distinctly what is absolutely going on in the life as it is, and the particular circumstances which occupy spirits at the time you see them. And you look at them as through a window at the real scenes of earthly life before you, and the persons acting therein. Now these things are given to your spirit, which is lifted upward and gifted with the faculty of really seeing what is described. The teachings will now assume the particular details of real life, and what is given is the reality of life as it is. You may suppose many things your own imagination, but it is really the absolute reality of living fact." And in regard to the first topic, it has been said, " while we approach the subject, to you and the world of so much importance, we should realize that what we now teach is different from that ever given to man before."

Thus the purposes of the further publication have been shadowed forth, and it is the intention of the undersigned in that, as it has been in this, to give the teachings as precisely and faithfully as they are received as is possible. And as they have no selfish purposes to advance, no preconceived notions to defend or sustain, they believe they are, and will be, able to give them as free from mortal taint as is in nature practicable.