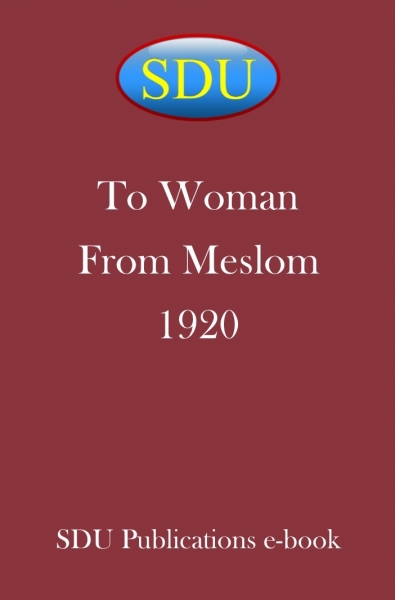 This and the former book purporting to be from "Meslom" through Miss Mary McEvilly, are among the best of the reputed communications from the other world of a spiritual and ethical character.

I do not know who "Meslom" is, or that he is, but I do know that Miss McEvilly has, both in connection with others and with my own experiments, given evidence of intelligence other than her own, acting through her brain and hand.

I think that to heed the Meslom messages would indeed help one to orientate herself in the universe, and to make harmony in both her inner and her outer relations.  "Saying so, does indeed make it so," as the book affirms, in the sense that whatever is fundamentally integral to a life may be brought into realization best by believing in, affirming and expecting it.

The ancient prophets were not primarily predicters, but were mouthpieces, for-tellers of God or supernal intelligence. I know no reason why inspiration should be shut up between the lids of one ancient volume, or why truth should not be told anew, reshaped to fit the conditions of another age, or why Miss McEvilly, considering the beauty and value of the teachings which find expression through her, should not be entitled to be called one of the "Minor Prophets" of our period.