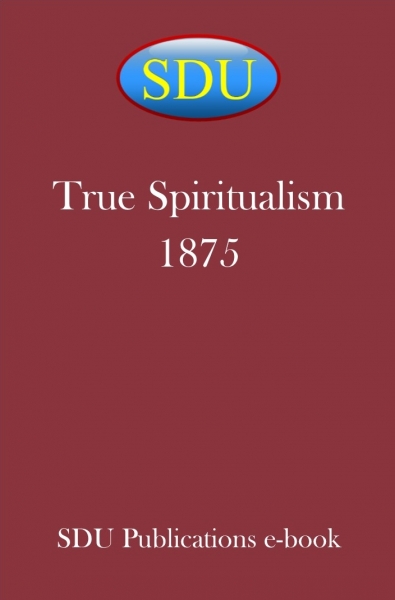 "What is spiritualism?" is a question that has been asked of late by those who never before gave any attention to the subject. The following pages will partially  answer that question.

Recent occurrences involving the genuiness of certain spirit manifestations, which obtained great publicity, it was supposed by many, would throw a doubt on the public mind upon the truthfulness of the whole subject of spiritualism, but such is not the case. A spirit of inquiry has been awakened to an extent never before known.

Truth never suffers, its march is onward, its force irresistible. Error, fraud, fanaticism and credulity, at times may appear to overwhelm it, but the apparent triumph will be of short duration, the latter must perish.

The statement headed "True Spiritualism," is supposed to embrace the general principles. The several chapters containing brief explanations, are more particularly designed to call the attention of the honest inquirer to the beautiful truths contained therein, leaving him to form his own conclusions.

In arranging the matter for publication, the author, of course, consulted the leading works on Spiritualism, and made such extracts from them as he deemed necessary to fairly place the subject before the reader.

Valuable aid was derived from that excellent book “The Problem of Life and Immorality," by Loring Moody, and from " Spiritualism” by Edmunds and Dexter, with other standard works.

The true spiritualists have no sympathy with modern manifestations, or with the principles and practice of certain parties who have assumed the name.

A large number of persons who have made the subject of spirit manifestations, in all their different phrases, a study for years, are not prepared to believe in the truthfulness of spirit materialization. To them no satisfactory evidence of its genuineness has yet appeared. Great difference of opinion exists on the subject among honest investigators. The reader will remember that spiritualists are not responsible for the articles contained in the ' newspapers, supposed to be the organs of the believers in the Harmonial Philosophy. The publishers chronicle the current events of the day, leaving it to their readers to judge of their merits, and are not supposed to endorse everything that appears in their papers.

The genuine Spiritualist has more regard for truth than public opinion, and

“In strong integrity of soul
Uplifted calmly stands, and hears the words
Of stormy folly breaking at his feet."

No change of time or circumstances will ever alter his faith in what God in nature and his own judgment teaches him to be true. For these teachings and their author he has “a high sense of conscientiousness and a deep and solemn veneration."