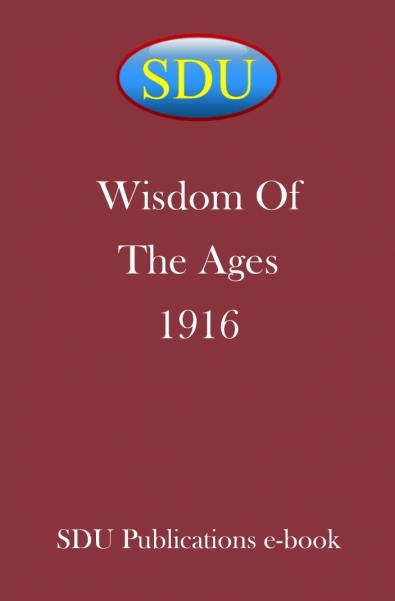 Truth is eternal, exhaustless, unfathomable. Its Divine Fount is far beyond human discovery, however rich the intellect which aspires towards its inaccessible heights. It lies far above the topmost clouds which eye of man can scan, far beyond the Storm-King's throne, whence the flashing lightnings are hurled, where the mighty thunderbolts are forged; far above the vast waves of ether, that wide Planetary Sea where suns and worlds float and sail their swift, majestic currents; still farther on beyond the boundaries of this entire Universe of expressed Life, toward the Infinite, causeless Cause, the Unmanifest, the Silence, from whose profound depths all vibrations are stirred, all Light spoken, all Harmony breathed—even there and only thence has Truth its pristine, immaculate birth.

No human ear can catch its full-toned syllables, no heart conceive the beauty, the grandeur of its sublime accents, but to the aspiring soul come glintings of its full-orbed Glory, flash-lights of its Perfection. And to that soul which likewise feels its own union with the same wondrous Source, there come in-breathings, or inspirations, of this Eternal Wisdom, whose translation into human speech serves to illumine mundane shadows.

All down through the ages such souls have blessed and enlightened the world. The messages received by such seers, prophets and psalmists have been collected in every cycle of human advancement, into Scriptures fitly termed sacred, into Vedas, Sutras, Koran, Avesta and Bible. No age, nation or teacher holds a copyright above any other for the excellence or infallibility of its particular message. The One Fountain has countless rills, and were all these minute streams collected into one great volume, the vast reservoir which feeds them would still be scarcely touched.

But as humanity advances, as material, grovelling tendencies are transcended and outgrown, and the Light of the Spirit illumines mortal vision, as the yearning of the soul increases and is felt above the clamor of the senses, as the demand for more of Truth arises from the lips and hearts of men, such earnest prayer is always answered. Pure-hearted messengers are chosen and prepared through discipline, through sorrows manifold, to hear this transcendent Voice and transmit its potent accents to mankind.

The planet is now passing its sixth cyclical birthday. The fifth grand cycle wanes, a new spiritual dispensation is upon us; the sixth age advances, the opening of the sixth seal. Our solar centre in his tireless revolution around far distant Alcyone, with his attendant retinue of worlds, passes from one sign of the Zodiac to another, making marked planetary changes in physical, mental and spiritual life. Wars, famine and pestilence abound—the fermentation of unrest, which will work out the necessary purification for the spiritual era, whose dawn already is dimly discerned. Even now the angels of preparation for this glad new Day are on the earth or in the air, psychic gateways are being prepared among the children of men for the entrance of new messages of Truth, for deeper words of Wisdom, for grander paeans of Harmony than have hitherto blessed the world.

Such a message is contained in the rare volume before us, whose origin and manner of transmission are calculated to inspire the soul with reverence and awe. Not alone is it literally the work of angelic hands, but it serves also as a valuable link with a prehistoric past, the inspirer of these pages having once worn mortal form, once trodden mundane pathways, in the earliest civilization our planet has known, many thousand years ago, in Central America.

The instrument through whom this grand, unique message has been transmitted—Dr. George A. Fuller—is admirably fitted to be thus chosen as a mouthpiece of wise inspirers, being a man of pure, clean nature, a close student, philosopher and aspirant for Truth, loving honor and integrity better than fame or fortune. He has been for years before the public as a teacher of spiritual truth, constantly under observation when criticism was rife, without a stain or breath of calumny. Some twenty-five years ago, Dr. Fuller possessed to some degree the gift of automatic writing, and at that time received communications purporting to come from an ancient dweller of Central America. But these messages were chiefly historical and personal, and after a time ceased; gradually also the automatic gift was withdrawn, presumably forever, After the lapse of a quarter of a century, however, —

"The mills of the gods grind slow,
But they grind exceeding fine,"—

to Dr. Fuller's great surprise, on the morning of June fourth, suddenly and without warning, a peculiar pricking of the hand and arm, with a strong impulse to take his pen, resulted in the transcription of the first chapter in this volume, followed an hour and two hours later by succeeding chapters. At intervals during the current summer, though busily engaged in other absorbing duties, the volume grew, page by page, until the ancient Teacher and Revelator himself pronounced the Finis.

Who shall say that other sacred books have not been similarly penned? The manner of inspiration, it is true, matters little, or whether the angel is seen, as it was by John in Patmos, and other early writers; it is the purport of the message which decides its value, and surely the exalted character of this scripture, its revealments of spiritual truth, its advanced teachings, its lofty conceptions and ideals, the beauty of its musical rhythm, the utterly impersonal feature of its authorship, must stamp this work, whatever its source, as pure inspiration of a high order.

By the expressed wish of the intelligence inditing these pages, the volume is now given to the world. The same Power that had a use for it and thus called it into being will direct that those souls who are ready, whose further growth demands this nutriment, will attract it unto them, while minds less ripened may pass it by until a more convenient season. To sow the seed is all the disciple can do. The Lord of the harvest can alone bring the increase in His own time and way. May it prove an hundred-fold to every thoughtful, earnest reader!

"Rise, oh my soul, to still loftier heights; unfettered be all thy wings!"